What moves people to action?

The people you’re attempting to influence have to THINK you have a good idea. That’s where logic … reasoning and evidence … comes into play.

They have to FEEL in their hearts … and their guts … that it’s the right thing to do. They have to want to do it at an emotional level.

And none of that matters if they don’t TRUST you … if they don’t see you as a credible, trustworthy person, a straight shooter. It helps if you’re an expert with a wealth of experience and a stellar reputation.

But let’s go beyond these abstractions and look at a real life example that clearly illustrates exactly what we mean when we talk about appealing to trust, logic, and emotion.

And who better to turn to than the masters of the art … advertising people. 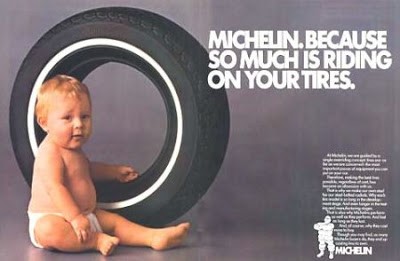 For better or worse, these folks understand how to get you to buy what they’re selling.

I say “for worse,” because so much advertising is manipulative, but it doesn’t have to be.

You should always strive to influence with integrity.

Some of you may not be old enough to remember … I’m dating myself here … but Michelin ran a series of iconic ads back in the 80’s that featured a baby sitting in a tire.

The tagline was … Because so much is riding on your tires.

They made choosing what tire to buy a commentary on how responsible a parent you were! Talk about an emotional appeal.

That said, they didn’t neglect to appeal to logic or trust as well.

What I want to do now is write my own mock tire ad, based loosely on the Michelin pitch. And I’ll highlight the appeals being made in parentheses, so you can see where the rubber meets the road. (Pun intended.)

“Yes, this tire costs more initially, but it’ll get you 60,000 miles, so your real cost, the cost per mile, is actually less than with cheaper tires. (Logic)

That’ll save you money, not to mention the time and hassle of buying new tires twice as often. (Logic and the emotion appeal of avoiding the unpleasantness of sitting in a tire store waiting room)

Besides, when you buy quality, you never have to deal with that nagging feeling that you settled for less than the best. (Emotion … “pain” avoidance) Instead, you’ll be able to take a certain pride in owning a prestige tire and being smart enough to know a good deal when you see one. (Appeal to pride / status)

That’s why it’s on all the police cars in the city. (Logic … causal reasoning.) The chief swears by these tires. Trust … testimonial)

If the tires get the job done for the police under the most demanding conditions, they’ll certainly do the job for you. (Logic … analogical reasoning)

What all this means is safety for your family. After all, you wouldn’t want your little baby riding around in bad weather on just any tire, would you … dad? (Appeal to emotion … guilt … and the real clincher)

To wind this up, there are three common mistakes I see people making when they seek to influence.

The first is they fail to establish their credibility, their expertise and trustworthiness. You can’t just expect people to trust you. You have to show them why you deserve to be trusted.

The next two are personality specific.

The thinkers in Jungian terms … tend to ignore or underplay the importance of the appeal to emotions.

The feelers … tend to downplay logical argumentation and play to the emotions too much.

The key is to use all three appeals, so you connect with the whole person … mind, heart, and gut.

Do that with a positive intention of serving others and you’ll become a very powerful influencer.