The need to compete is a simple fact of life. Everyone can’t have everything they want any time they want it. Whenever there’s a scarcity of something desirable, be it food or a job or a romantic partner, people will compete with each other.

And there’s nothing wrong with healthy competition where people succeed in gaining the prize by virtue of their superior knowledge, drive, skills, and creative ability.

The need to compete on merit keeps us sharp, always figuring out new ways to gain an edge.

Where competition becomes destructive is when power, position, and influence enter the equation rather than merit.

I recently became involved in a situation in a company where a senior person intruded on the territory of a couple of colleagues … because she could.

What do you think that does to morale and ongoing collaborative efforts?

If you’re a leader, you can’t let that kind of behavior persist. It’s corrosive.

As I see it, the real problem we see with unhealthy competition stems almost entirely from two things.

On a side note, psychologists tell us something like 4% of the population are sociopaths, willing to do anything … without remorse … to get what they want. They’re among us. Beware.

So, what can we do about these two things? 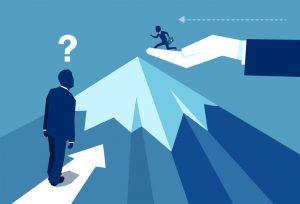 Let’s look t it from two different perspectives, that of the leader and that of the individual contributor.

If you’re a leader, you have to make it clear you expect everyone to work together to accomplish your mission and reach your goals. And you won’t tolerate infighting, backbiting, and power plays. By that, I mean there’s a clear price to be paid for engaging in bad behavior.

But that means setting clear expectations around specific behaviors, not just mumbling some words about everybody playing nice in the sandbox.

Understand that some people are hardwired to be more competitive by nature. That’s fine as long as they have honorable intentions and play fair.

They mean well enough. It’s just a matter of not understanding what’s expected of them in terms of actual, identifiable behaviors.

From the standpoint of mindset, they need to get that teams have to embrace a “one for all and all for one” mentality and behavior patterns or they’ll never perform up to their potential.

As a leader, it’s your job to implant and reinforce this mindset.

And if you’re an individual contributor, what can you do to find the right balance of competitive spark and collaborative team play?

The challenge of the natural born competitors in life is to work on becoming more cooperative and collaborative in their approach, so they can function well within a team.

On the other hand, those who are more naturally less competitive … who like to go along to get along … often need to learn to assert themselves more and claim what’s theirs if they’re going to be really successful and provide maximum value to their team.

Just remember, it’s the same with any personality preference …

A strength taken to an extreme becomes a weakness.

So, work on becoming more balanced if you lean heavily one way or the other.

The bottom line: Successful organizations and successful people manage to find the right dynamic balance between exercising their natural competitive urges in a healthy way and working together to achieve win-win outcomes.

And what that means, more than anything is that to stand out, you don’t need to elbow out.