A sense of permanence … it’s something we all need in our worlds.

After all, you have to have some terra firma on which to plant your feet … some things you can count on remaining constant from day to day, week to week, year to year, or it all becomes too chaotic … too debilitating.

But here’s the thing. That sense of permanence is an illusion. All it takes for that truth to hit home is for some unwelcome change to come along to put what seemed so sure, so count-on-able, in doubt. 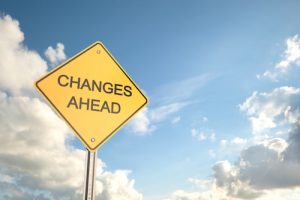 You get sick or have an accident. You lose a job. Get divorced. Someone dies. There’s a tsunami.

And no one gets to escape “the slings and arrows of outrageous fortune.” Stuff happens. Some predictable … some out of the blue.

The challenge you and I face today is no different from the one humans have faced since the beginning of time … to be as centered, calm, creative and happy as we can be in a world of impermanence … as we cling to this rock hurtling through space at 38,000 miles an hour.

Can I get philosophical for a moment? I promise there’ll be a practical payoff on the other side.

Nothing ever is. It’s always becoming.

Those things that seem static and unchanging, for even a moment, really aren’t.

We talk about the status quo, but there’s quite literally no such thing as current reality. The quo is never status.

It’s a hard notion to wrap your head around. But there’s a benefit for those who can. They’re able to roll with the punches in life more easily.

Why? Because they aren’t taking continuity for granted. They don’t assume things will stay more or less the same, so they’re better prepared mentally for disruptions when they occur.

Notice I said better prepared. Not many of us are all that well prepared, regardless of mindset … and a shock is a shock.

But if you think of things as being mostly constant … with change rudely shaking things up every now and then … you can feel abused and victimized by unwelcome change when it ups and smacks you in the face.

So, what are the practical takeaways here?

Number 1: Seeing change as an imposition rather than as a given can make you feel like a victim. It’s the difference between saying, “Damn rain” and acknowledging that “Into every life a little rain must fall.” And there’s no empowerment, no possibility, in playing the role of the victim.

Number 2: If change is constant, the only way to relate to it in a healthy way is not to resist it or bemoan it, but to simply be the one initiating and directing the change as much as possible.

After all, the alternative is to be stuck reacting to it … often rather helplessly.

Think of it this way. If there’s a movie being made in real time … the movie of your life … wouldn’t you rather be the director than an actor following a script someone else has written for you?

If nothing ever is and it’s always becoming, who determines what it’s becoming?

Look, I get that stuff happens that seems completely out of your control, but whatever you do, don’t buy into the concept of fate. Nothing is more disempowering.

Am I talking about making lemonade out of lemons? Sure, but there’s more to it than that. It’s not so much about what you do. It’s about how you perceive the world and what you become as a result. Flexible, adaptable … someone who not only survives but thrives.

We are promised nothing … guaranteed nothing …and the surest things can change. But that’s no cause for anguish. It just means we’re guaranteed an exciting and unpredictable ride … and we can make of this life and its crazy twists and turns what we will.